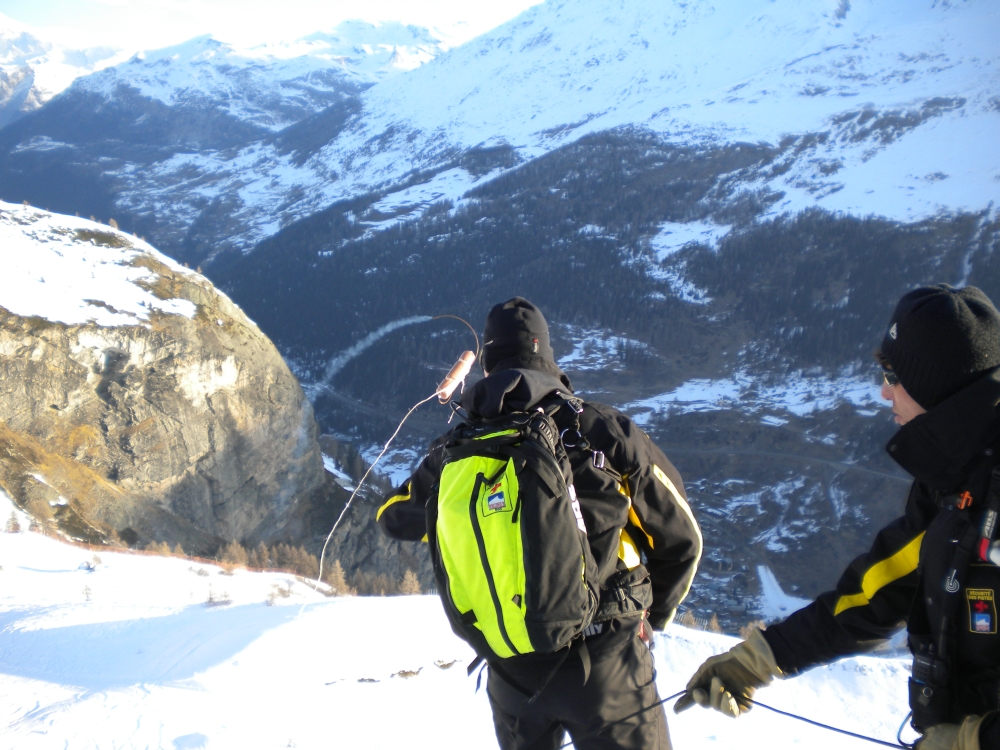 What do the safety procedures consist of?

We set off controlled avalanches using explosives in areas that have a historical record of being at high risk from avalanche. Colloquially speaking, we refer to this practice as the “PIDA: Plan d’Intervention de Déclenchement des Avalanches” (Controlled Avalanche Detonation Plan).

Consequently, in the Tignes ski area alone, there are 150 detonation points listed in the “PIDA” plan.

Which areas do the “Régie des Pistes” look after?

As the name indicates, the “Régie des Pistes” (Piste Management) is in charge of keeping the ski runs safe! However, in reality, its framework for intervention is much greater.

Therefore, the ski patrollers are responsible for the safety of the workforce in the ski area (snowplough operators, ski lift engineers etc.), but also the roads and residences located below slopes that could potentially present a risk.

I would like to take this opportunity to remind you that the off-piste areas have, by definition, not been made safe. So be careful!

How do you decide on a response plan?

We refer to three main sources of information to help us with our decision-making:

We decide on a course of action for the following day before 4pm each day.

On the (thankfully fairly rare) occasions where the avalanche risk is very high, a security commission convenes. It includes the Mayor, the “Régie des Pistes”, the ski lift operators as well as guides and instructors etc. Depending on their observations and recommendations, an action plan will then be implemented (Road closures? Shutdowns? Emergency shelters?).

What methods do the “Régie des Pistes” use in Tignes?

We use several different methods:

When do these safety procedures take place?

You are unlikely to miss them: the extremely impressive explosions are rather noisy! Especially when the detonations are carried out in areas with a big echo.

CATEX and GAZEX explosions can be detonated from as early as 4am.

However, we have to wait for the first light of day, towards 7am, to begin the first detonations by hand. Keeping our personnel safe is of course our priority: if visibility isn’t good enough, we might have to delay sending our teams out.

Be careful: if conditions change during the course of the day (in the event of heavy snowfall or big variations in temperature for example), some areas may need to be made safe again. This is why a piste might be open in the morning but closed a few hours later. Do not ski down a closed piste! They are always closed for a reason…

It should be noted that contrary to what you might think, unfortunately it is impossible to make the ski area safe the night before, even if it’s a clear night. In fact, the wind can shift enormous amounts of snow within a few hours creating new wind slabs that need to be made safe the following morning!

How long do these safety procedures take?

This really depends on the weather conditions: is there good visibility? Is there easy access to the detonation points or has it been complicated by heavy snowfall? Is it necessary to detonate all or just some of the detonation points? Not to mention the necessary clearing of the piste (or the road) following the controlled detonation of avalanches.

In short, we do everything we can to be ready “on time”, but this isn’t always possible in exceptional conditions. We are responsible for the safety of skiers and when you have such a responsibility on your shoulders, you would rather delay opening a piste than risk somebody getting hurt.

More informtion: consult the municipal law relating to the security measures on the resort slopes.